Given its proximity to the major golf markets of Milwaukee, Chicago, Madison and the Twin Cities, plus its longstanding reputation as one of the Midwest’s most popular summer destinations and its emphasis on outdoor recreation, one would assume that golf has always been an important part of the Wisconsin Dells experience.

Surprisingly, that’s not the case. Sure, in the 1970s and ‘80s, dad might have thrown his clubs in the trunk and sneaked away during a family vacation to play a quick round, but his options were limited. In the Dells, it was either Cold Water Canyon at Chula Vista Resort, Christmas Mountain Village, or several small town country clubs a short drive away.

Certainly, there were enough putt-putt courses to keep the kids busy when they weren’t splashing down waterslides. But the Dells could hardly be called a golf destination. Two-time U.S. Open champion Andy North of Madison remembers visiting as a child, but doesn’t recall bringing his clubs.

“We’d go up there once a summer and do the (now-closed Tommy Bartlett) water ski show and the Ducks,” North said, “and that was about it.”

Cold Water Canyon was the first course in the Dells; the original nine holes, built with horse-drawn equipment, opened in 1923 as Berry’s Dells Golf Course (a second nine holes was added in 1999, and Chula Vista Resort purchased the course in 2004). Christmas Mountain Village came along in 1968.

And then … nothing. For many years, a golden opportunity was being squandered.

But lately, Wisconsin Dells has been making up for lost time.

In fact, along with its rise as the “Waterpark Capital of the World,” the Dells has become one of the state’s busiest (and best) golf playgrounds — and a hub for large groups on buddy trips and serious golfers with ambitious itineraries. Some of the best public golf in America can be found within a two-hour drive of the Dells at Erin Hills, the Golf Courses of Lawsonia, the Kohler Co., Sand Valley Resort and SentryWorld

The transformation traces its roots to the opening of Trappers Turn in 1991. The original 18 holes, designed by North and the late Roger Packard, was the site of the 1998 Wisconsin State Open won by Steve Stricker, who went on to claim 12 PGA Tour titles and captain the 2020 U.S. Ryder Cup team.

Trappers expanded to 27 holes after that State Open and in 2007 was sold to Kalahari Resorts, which has made numerous upgrades and improvements.

In the meantime, the sprawling Wilderness Resort opened its own 18-hole course, which was downsized in part by a resort expansion and is now a sporty nine-hole executive course. In 2008, Wilderness Resort opened Wild Rock, a championship test carved through the woods and boasting spectacular topography and breathtaking views. The course was designed by Michael Hurdzen and Dana Fry, who were working simultaneously on Erin Hills, site of the 2017 U.S. Open.

The combination of Trappers and Wild Rock gave the Dells 45 holes of serious golf and started attracting a new kind of visitor – one who would never set foot in a waterpark, feed the deer, go ziplining or paddle down the Wisconsin River in a canoe.

“What we’re finding is a lot of people stay in the Dells and play us and Trappers Turn, but then they’ll travel to Sand Valley or over to Lawsonia,” said Pat Stein, the PGA general manager at Wild Rock. “From the Dells, you can go to a lot of golf courses in a short drive. This is becoming a hub not only for golf but for accommodations, and then the golfers can venture out from here.

And access to the game is not limited to championship golf on brawny courses. The nine-hole Wilderness Woods, salvaged and reimagined from that original 18-hole course, is proving to be popular with juniors, beginners and families staying at the resort.

“Last year, with COVID, it really spiked,” Stein said. “And that bump in play has carried right into this year. We’ll probably do 9,000 to 10,000 rounds on that course this year. People just like being able to play in a couple hours and then they’re back to waterslides and whatever else they’re doing in the Dells. It kind of fits into their plans.”

In July, Trappers Turn opened 12North, a 12-hole short course designed by North that features flexible teeing grounds and dramatic green complexes with exaggerated features. Though it can be set up to challenge even the skilled golfer, 12North should prove to be popular with golfers of all abilities. A massive putting course is scheduled to open in 2022.

Underscoring the rise in popularity of novice-friendly short courses, North said his daughter was planning an October trip to the Dells with a group of friends. They are excited to play 12North.

“That’s a group of people you’d never get to play golf in the Dells,” he said. “It’s not like they’re good players. Maybe three or four of them can shoot 100 and the other ones can barely get the ball in the air. And they’re all fired up to go play the par-3 course.”

Another fun option is Fairfield Hills Golf Course and Driving Range, between the Dells and Baraboo. Jim Tracy bought the nine-hole executive course eight years ago and has since added three holes. The flexible design allows golfers to play 3, 9, 12 or 18 holes.

“I give people the option,” Tracy said. “It gives you a different experience. Probably 65 percent to 70 percent of the people play 12 holes. It’s worked out well. We’ve also got a really nice driving range here. A lot of people will go to the driving range and then play three holes or nine holes. It’s given us a nice combination of offerings for our golfers.”

Tracy estimated that 60 percent of rounds were played by locals and 40 percent by tourists, the latter mostly on weekends. Business has never been better.

Maybe the Dells’ new slogan can be “Splashing and Slashing: Where Waterparks and Great Golf Meet.”

Gary D’Amato is the senior writer for Madison-based Killarney Golf Media. Before joining Killarney in 2018, he covered golf for the Milwaukee Journal Sentinel for 26 years. D’Amato is a member of the Wisconsin Golf Hall of Fame and is vice president of the Golf Writers Association of America. 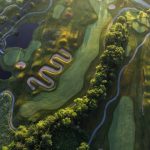 12North, a 12-hole par-3 course designed by Andy North and Craig Haltom, opened to the public this summer at Trappers Turn. 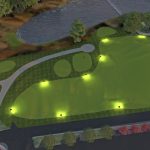 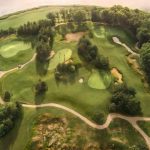 An aerial view of 12North